HOW DOES JOS WORK

A mixture of air, water and blasting agent is created in the patented JOS nozzle and these are set in rotation around an axis and sprayed out. An important criterion is that the water pressure and also the air pressure can be set as very low. However, the system also works without any added water,simply using a mixture of air and granulate.
Because the emerging jet has a very high proportion of air, this can expand, spreading the jet radially and thus results in a spreading cone in all directions.

The particles of the blasting material are not simply thrown directly onto the surface to be cleaned. Rather, carried by the expanding water-air mixture, they float along the surface and so result in the remarkable cleaning effect. Compared to some imitation products, there is a significant advantage. The particles in the jet are spread conically in a very evenly distributed manner and the cleaning effect extends across the whole of the final target area.

In practice, the process is remarkably simple. First the desired water pressure is set. Then the blasting material-air supply is added. The air-pressure is then increased until the white emerging jet assumes the shape of a cone. This novel invention and patented procedure gives all the advantages for the treatment of very sensitive surfaces as mentioned above.

The choice of the right blasting material is important for an optimal cleaning process. Conventional trade granulates, carborundum, flint an a few other materials can, in principle, be used.

The best results however are achieved using JOS own granulate, which is available in a variety of grain sizes. The remarkable effectiveness of these granulates has been confirmed in metrological studies by recognised institutes. 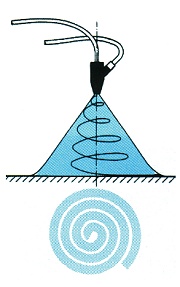 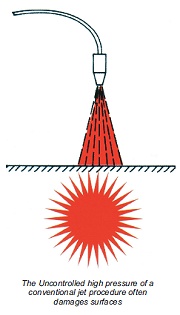